Over the years body fat levels have been the source of much thought, discussion and in some cases, frustration for many athletes, coaches and gym users regarding body composition and in particular, body fat measurement.

Recently the availability of body fat testing has become far more widespread in health clubs, leading to a boom in members wishing to know what their ‘body fat percentage’ is.

Prior to the integration of body fat assessment into the mainstream, many coaches and athletes had been keeping a close eye on physical condition using the methodologies described later. This article aims to outline a few of the more commonly-used body fat measurement techniques, how they work and what the pros and cons of each method are.

As I mentioned earlier, I am deliberately using the term ‘measuring’ – even though we can only estimate body fat using current technology. That said, using these methods we can gain some meaningful results that allow us to assess any change in a person’s recorded body fat.

The physiological rationale behind the skinfold estimation method is simple. It is based on the assumption that as a person increases their level of adipose tissue (fat) the increase in skinfold thickness will be proportional to the additional fat weight. As 50-70% of the adipose tissue in the body is stored subcutaneously (in the subcutaneous layer of the skin), the assumption holds true in most cases. The sum of the skinfolds is then used in an equation to calculate body density.

Two common examples of the equations used to estimate body fat are the Jackson Pollock (1978) and the Durnin and Womersley (1974). These equations are flexible to allow for differences in age and sex, which is especially important when dealing with a varied population.

The equations produce a figure for body density, which is then converted into a body fat percentage figure using the Siri (1961) equation. Given the small amount of equipment needed and the speed with which the measurements can be taken, skinfold estimation is likely to continue to be popular with practitioners and coaches as a method of estimating body fat.

Hydrostatic weighing is based on Archimedes’ principle, which states that the volume of an object is equal to that objects’ loss of weight in water. Simply put, underwater weighing determines the subjects’ body volume. From this figure their Fat Mass (FM) and Fat Free Mass (FFM) (which both have known densities) can be calculated.

The procedure for Hydrostatic Weighing is more detailed than the other methods. Firstly, the subject (wearing a swimsuit) has their dry-land body mass measured, before being submerged in a specially-designed tank of warm water. The subject next completes a forced maximal exhalation (forces all of the air out of their lungs). As the exhalation is complete, the scale records their underwater mass. The procedure is repeated a number of times to generate a more accurate reading.

The residual volume (air left in the lungs after forced exhalation) can also be predicted or measured. This technique is not widely available due to the large and expensive equipment required. It also requires a high level of training from the assessor in order to be performed accurately.

Although it is considered the criterion method for body fat assessment, it is not without its flaws. The main reason for this is the trapped air inside the human body, especially within the Gastro Intestinal tract (GI) and the residual volume of the lungs. There is no way we can ever remove or 100% accurately account for this, so it will always have a slight effect on the readings.

Bioelectrical Impedance Bioelectrical Impedance (BIE) is a technique using electrical resistance to determine percentages of fat mass and fat free mass. Electrodes pass a painless current through the body; all the while the impedance is being measured, providing the tester with a body density reading, which is converted into a body fat estimation. 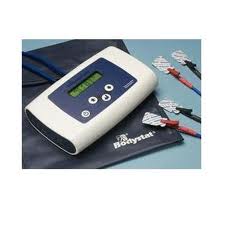 The principle of body impedance is based on the concept that electric flow is facilitated through hydrated fat-free tissue and extra cellular water (due to its high water and electrolyte content). The nature of fat is somewhat different – it is lower in water and electrolytes so will impede the flow of electricity from one electrode to the other, therefore the higher the subjects’ fat mass, the higher the impedance.

BIE has recently become a more widespread method of assessing body fat, thanks to the inclusion of the technology in many household weighing scales. The advantages of this method are the ease of use and the non-invasive nature of the technology. The major disadvantages of the technique are the sensitivity of the human body, and how easily food and fluid intake and storage can affect the results. Temperature can also have a significant affect on the readings, with warmer temperatures producing lower body fat readings than colder temperatures.

The sensitivity of the results produced via this method means it has been widely disregarded amongst professionals as an accurate tool. The pre-test protocol subjects have to adhere to means it is not a method that responds well to short-notice testing.

Subjects should be in a fasted state (min 4-6 hours) before testing, should have not exercised 24 hours prior to testing and should refrain from caffeine, alcohol and diuretics to ensure hydration levels are as ‘normal’ as possible. Large amounts of fat or protein in the GI are also known to affect results. These reasons all contribute to professional opinion that the method is not suitable for general use.

The methods exercise practitioners use to estimate body fat are wide ranging in their speed, accuracy and suitability. This article covers three of the most common methods. There are many others, but these are the key methods to review. They are essentially:

Remember though, although body fat readings are interesting and can gauge your progression or regression, don’t become too fixated on the numbers. You should always train to improve performance in your chosen activity or, for many of us, to be happy with how you feel and what you look at in the mirror- not what the numbers tell you. Fixation on one single aspect of your fitness and performance is not ideal- it can lead to neglect in other important areas of your overall wellbeing and development.

One thought on “Body Fat Measurement”