Ash is a husband, a father and a businessman. He’s a normal bloke, with a normal life. He’s also lost 44lbs (and counting) whilst training an average of 3 times per week….

Like a lot of guys, Ash found himself overweight. Be it through his food choices, poor training, lack of goal direction or whatever. He wasn’t drastically out of shape, just carrying a little more padding than he’d like. I know 34lbs sounds like a lot of weight, but most people are carrying that kind of excess weight.

It’s that typical Dad trap. Whether consciously or not, your balance of focus shifts drastically from looking after yourself to looking after your family. That’s fine for a while, but it doesn’t take long to find yourself overweight and unfit.

Stay on this path for long enough and you’ll be the kind of Dad who can’t play with his kids because even 5 minutes of running around with them wipes you out.

Nobody wants to be like that, but it’s really common. That focus has to be rebalanced.

The good news it it doesn’t have to be like that – you can still exercise and lose weight even as a parent. It’s what I help a number men do every week. Having a baby isn’t a pre-requisite for weight gain.

How Ash changed his life…

Ash approached me in the gym and asked about personal training. He explained his situation, his impending fatherhood and dissatisfaction about his training, his weight and his nutrition. All of the common concerns really. 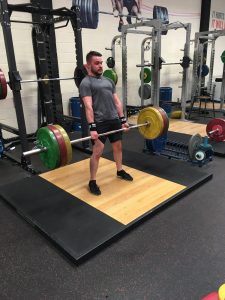 When we spoke about personal training I knew immediately he’d do well. He listened. He understood the importance of nutrition and the time he spent away from the gym.

Stage-of-life wise, he was basically me – young family and a business to look after. I know how that feels and the time pressures, so his programmes, his goals and his nutrition strategies were designed with that in mind.

Ash and his weight loss…

I addressed his diet first. Ash is a details guy, a numbers man. He likes targets and thrives in an environment in which he is challenged. He set up his account on MyFitnessPal which allowed me to track his food intake, his calories and make changes based on his results.

With any major target, we start with smaller goals. We didn’t think of major numbers in the beginning. However, with consistent, regular progress you can one day look back and say wow – I’ve lost 44lbs!

My first goal was to establish a new healthy lifestyle by sorting out his diet. We identified that certain food stuffs didn’t really agree with him, so removed them from his diet and charted the results. It pretty quickly established a pattern of eating that he enjoyed and allowed him to lose weight quickly and consistently.

This approach will see the first 70%, (give or take) of the weight come off.

Nutritionally, we worked with a framework rather than a set diet. We do this for two reasons…

What this means is that even when Ash isn’t with me, he can identify the best choices to help him lose weight and stay healthy.

Training wise, we had to make a few changes.

Ash has previously followed a ‘bro’ style workout. Split routines, lack of training balance. Basically a modified bodybuilding approach followed by most men who use the gym. This didn’t really suit him or his goals, but as with many male gym-goers, it’s the default approach to exercise because it’s popular and well known.

The problem with this approach is that it doesn’t really work. There’s no focus, no progression, no justification for including exercises. It’s like driving a car with nowhere to go. What we do in personal training is base our workouts around goals and outcomes. We train for a purpose – weight loss, building muscle, building strength, preventing injury etc.

There’s always a goal in mind.

I addressed the balance with which his training was set up. I focussed on building his strength and slowly ramping up the volume as and when the time was right.

By making him strong first we built a platform on which he could develop other areas of his fitness. By making sure he was strong, we not only began to improve his body composition but we also make him less susceptible to injury, which obviously a good thing – especially when we are about to ramp up his training.

When he was used to the extra load, we could start to increase his training volume by adding conditioning workouts into the mix. This would not only improve his all-round fitness, it would see him burning more calories so would accelerate his fat loss.

The extra muscle mass added to his frame, not to mention the increased training volume means he burns more calories at rest now than he did at the start. It’s a major help towards that lost 44lbs!

So where are we now?

Well Ash has gone from a gym goer to a person who really ‘gets’ the value of health and fitness. He’s a bloke who now takes on fitness challenges rather than just goes to the gym – in the picture below you can see Ash (far left) at the end of the 2016 Tough Mudder North West. 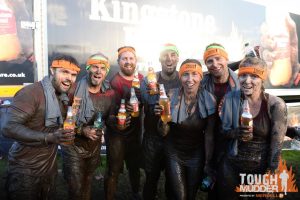 His workouts still maintain a solid base of strength training, but we have also added a lot of conditioning work on top. This makes his fitness more rounded, improving his GPP and athleticism – it means we can take his training in whichever direction we want to because he has a fantastic foundation of fitness.

All of this from a guy who a few months ago was a semi-regular gym goer with only a basic idea of training approaches and very little understanding of nutrition, what worked for him and how he should structure a diet.

You can do it too. As I’ve said in this article, he’s a normal bloke – wife, kids, busy job and he’s lost 44lbs. Personal training is about helping you to achieve your fitness goals. Most people go to the gym with no real plan or idea of what they are doing and end up making no progress at all.

I’m proud of Ash. Anyone who has lost a significant amount of weight will know that it’s not easy. Whether you’ve lost 44lbs or 5lbs, you’ve had to make changes and stick to them. He’s done that and now looks great – leaner, stronger, fitter, more muscular and ready to take on the next fitness challenge!

The job of the personal trainer is to make that process easier and make it successful, but it’s a team effort between the trainer and the client.

For more information, don’t hesitate to drop me a line on 07866361964 or email me at Steve@Hoylesfitness.com.

2 thoughts on “How Ash Lost 44lbs with Personal Training”

5 Reasons why the Tire Flip Needs to be a Big Part of Your Workouts...Exercise & HealthForget 75 Hard... It's a 90 to New Challenge Now...Motivation & SupportThe 75 Hard Update. Round 2, Update 1...Motivation & SupportIt's Round 2 of my Hard-Ish 75! Ding Ding! Variation of the 75 Hard Challenge...GeneralDo Smart Watches Help You Lose Weight? A Look into the Stats...Weight Loss & NutritionDoes Walking Increase NEAT (Non-Exercise Activity Thermogenesis)?Exercise & Health