One of the problems with being on a diet or calorie restriction is that it can be utterly grim (if you do it the hard way). Living a life of bland foods, boring recipes and constantly denying yourself anything tasty takes its toll on your motivation pretty quickly.

It doesn’t have to be like that though. Seriously, it doesn’t. You can make a lot of low calorie diet swaps that won’t make you hate your life.

My point with this post is to show you that you can make lower calorie diet swaps without it leading to you eating a load of boring, bland food. A few simple tweaks, changes and suggestions and you’ll be keeping your calories down without even realising it.

The reality is, if you want to lose fat then you have to be in a calorie deficit. In order to maintain a calorie deficit for the long term, you need to be able to make choices and swaps that aren’t going to sap your motivation because they are just too depressing.

Here’s a list of simple low calorie diet swaps that I use. They’re not difficult to do and they help keep your sanity during the low calorie days…

These are great and tick every box. You can make them for pennies, they are super low calorie and low sugar. All you need to do is pour squash or a diet fizzy drink into a mould and freeze them.

If you’re feeling especially creative, you can even add chopped fruit – chop it finely though, otherwise you’ll have huge chunks of frozen fruit in your lolly and it’s a nightmare to eat!

Once the lollies are frozen, simply run a little warm water over the mould and pull them out. Hey presto! A cold, sweet snack for barely any cost and less than 50 calories – if you use sugar free squash it’s almost calorie free!

Here’s the moulds I use at home…

I made a couple of raised vegetable beds a few years ago and they are great – every year they supply us with potatoes, onions, salad, herbs, peas, broccoli and all kinds of other things.

Once of the best things I planted was spearmint. It’s a literal doddle to grow – it’s essentially a weed so grows fast and spreads (with that in mind, grow it in its own pot, otherwise it’ll take over your entire planting area!

On to fresh mint tea. Simply pick 5-6 leaves – leave the stem on if you like and put them in the cup. Pour boiling water over them and leave it to brew/stew for a few minutes and then drink. 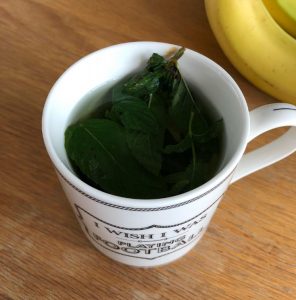 A medium latte can be around 200 calories. Swap a couple of those per day for this and you’ll save 400 calories per day. If you did that 5 days per week, it’s 2000 calories every week!

At the risk of sounding like a student, I love tinned fruit – especially peaches. If you open a tin of peaches and pour them into a bowl, you have a dessert in seconds.

I’m not suggesting it’s better than a huge slab of cake, but it’s cheap, quick and really low calorie. A whole tin of peaches in juice (always go for juice, not syrup) comes in at 97 calories. That’s insane – less than 100 calories!

Try a tin of peaches and I promise you that it’ll satisfy any cravings for something sweet.

Sod it. If you’re feeling adventurous enough for for tinned pears, tinned pineapples or mixed fruit. The world’s your lobster…

Have Steamed Rice With Indian, Thai or Chinese Food

I’d never suggest you don’t enjoy food pleasures, but if you want to lose weight you have to make certain sacrifices. A simple one of these is to switch to boiled or steamed rice when having a takeaway or heading into the restaurant. 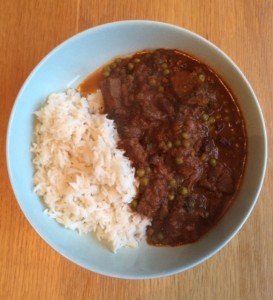 A portion of boiled or steamed rice comes in at around 150 calories. To put that into perspective…

I personally don’t see switching the rice has a sacrifice. If I go to an Indian restaurant, I’m going for the curry – not the rice! If a simple switch can save me 300 calories, I’m going for it!

Also, in an Indian restaurant skipping the naan bread will save you around 350 calories too. That means by having steamed rice with your curry, instead of fried rice and a naan bread, you’ll save yourself around 600 calories. All of a sudden, that takeaway isn’t so bad!

If you’re out having a drink, switching from a normal mixer to a diet mixer can save you a lot of calories.

Say you drink vodka and coke. Switching from normal coke to diet coke will save you around 140 calories per drink. If you were to have seven drinks over the course of a night, that’s a saving of 980 calories – nearly a thousand calories by a simple switch.

What’s more – after a few drinks you wouldn’t even notice the difference!

I love chips. We all do. Unfortunately, chips are really high in calories. Their large surface area and the fact that they are deep-fried means they carry much more fat and therefore calories than other potato dishes.

Chips can range between 400 and 800 calories per portion, depending on where you buy/how you cook them.

A simple (and easily as tasty) switch is wedges. The way I do them is really easy – chop a potato into long wedges, drizzle with a little bit of oil and cover with seasoning. You can go as simple as salt and pepper, but I my favourite is this one…

Cook them in the oven until they’re ready. You won’t miss chips and they’re roughly half the calories, depending on the type of chips you have. A standard portion will be around 300 calories.

Roast Chicken Instead Of Fried

As with chips, we all love fried chicken. The problem is, it’s seriously high in calories. If you fry anything with breadcrumbs or batter, they act as a fat sponge and they absorb more of the oil than normal, adding a lot of extra calories.

Switching chicken fried in batter or breadcrumbs for a baked or roasted version will save you a lot of calories and will still taste great. 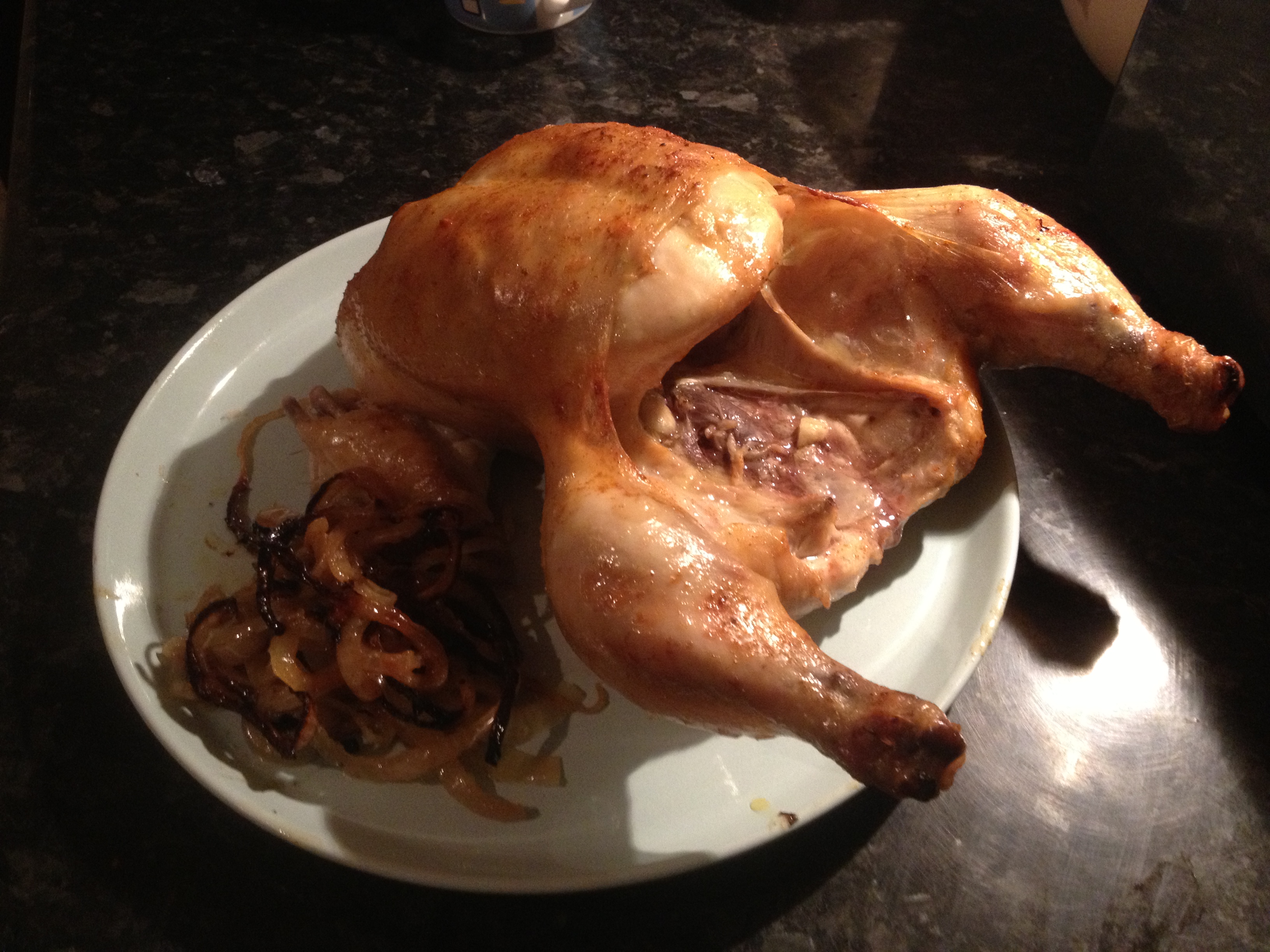 Drop the deep fried chicken and your calorie consumption will plummet!

This one is a simple one – it’s merely about volume. I think of this one as a low calorie diet swap that you don’t even notice, because you’re still having a treat.

If you have a bowl of ice cream, you’re likely to fill it up. That might take 4 or more scoops (if you’re a glutton like me). Psychologically, it’s been proven that a smaller plate means we eat less, so replacing the bowl with a cone means you’re less likely to eat a huge amount of ice cream.

An 80g scoop of vanilla ice cream contains around 130 calories. If you have a cone, add another 15-20. You can have a single scoop ice cream at home for around 150 calories.

If you had a bowl with 4 scoops, that’s now 520 calories. Spot the difference?

Drizzle chocolate sauce on top (as is the law) and you’ve added another 50-60 calories.

Stick to cones. You’re still getting ice cream, but you won’t be getting the belly that goes with it.

Ice Poles Instead of Fizzy Drinks

Sounds weird, so hear me out with this one.

On a hot day, a lot of people reach for a cold drink to cool them down – it’s not about the hydration particularly.

The thing with that is, a fizzy drink such as a can of coke comes in at 170 calories, whereas an ice pole is around 20 calories. It’s a saving of 150 calories – do that three times over a day and you’ve saved 450 calories.

This one is pretty obvious. Given mayo is made largely with oil, it’s very high in calories. Tastes great, but comes at a high calorie cost.

A tablespoon of mayo contains around 95 calories. The same size serving of salad cream is around 35 calories. If you have a couple of tablespoons of a particular dressing on your meal, you’ve saved a potential 120 calories.

Not to be sniffed at.

Custard Instead of Ice Cream

If you’re having a dessert, chances are calories aren’t at the front of your mind. If however you want to make a little calorie saving without sacrificing your dessert, go with this one…

Switch the ice cream for custard.

A serving of vanilla ice cream is close to 300 calories. If you switch that for a serving of custard, it’ll be around 100 calories. Saving 200 calories is certainly helpful on a diet.

It’s another example of a low calorie diet swap that you barely even notice.

The biggest issue most people have with diets is that they are tough to stick to – that’s why there’s a school of thinking in nutrition that says the best diet in the world is the one that you can stick to.

These low calorie diet swaps aren’t going to be the single individual changes that see you lose 20lbs, but added up collectively, they’ll work.

More importantly, they’ll improve your chances of staying on your diet 100000000 fold (not mathematically proven, but you get my point). You’ll be making low calorie diet swaps that won’t make you hate your life.

If you want a website that gives you accurate calorie data for your foods, I recommend MyFitnessPal. It has a pretty huge food library and is updated regularly.

Do You Even Lift? 5 Weight Lifting Tips for BeginnersGeneralHow Treating Psychological Issues Can Improve Your Fitness GameGeneral4 Ways You Can Motivate Yourself To Prolong Your WorkoutGeneralGetting Fit: What Are The Most Important Things?General6 Tips for Better Health CareGeneral8 Inexpensive Ideas For Your Next Cheat DayGeneral