I’ve reached that point in life. That point where your weekends are generally hangover-free and you have plans that stretch beyond the pub. Dare I say it, I even signed us up for a family membership of the National Trust today.

So what has that got to do with the Trespass Belas boot?

A lot, as it goes. I’m now going to be walking up and down dale, across streams, up hills and mountains more and more, which means I need a boot to match. I’ve tried cheap walking boots and it’s always ended in the same way – blisters, wet feet and regret.

I was positive about trying the Trespass Belas boots. I was asked to review a previous Trespass product, a cycle jacket and was really, really impressed. If the boots were as good as the jacket, I knew they would be a great product. 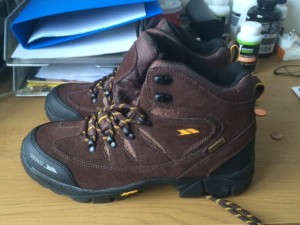 I had them in the office for a while before I took them out for a test. This was on purpose – I wanted them to be really tested. Knowing winter was on its way and given I live in the North of England, there would be plenty of opportunity to give them a thorough test.

I dragged my family out in the snow. We walked to Lyme Park which is just down the road from my house. It’s an expanse of hills, marshes, grassland, rocky terrain and muddy sections – perfect for trying the Trespass Belas boot. I had a long walk planned – it doubled up as both a review and a day out in the snow, fresh air and exercise for us.

I was decided I was judging them on the following…

They passed all three with flying colours. Furthermore, it was -4 degrees celsius when I tested them and they kept my feet remarkably warm. I was really surprised at this, but perhaps I shouldn’t be. They are a great product.

We trudged through the snow for three hours, sledging with the kids, climbing the hills, walking the rocky paths and through the mud. I didn’t slip a single time thanks the to Vibram soles – they felt secure under foot the entire time, plus they were really comfortable despite the rugged terrain.

The Trespass Belas boots are fantastic and taught me that walking in the snow is a totally different experience if you buy the right kit!

You can buy some Trespass Belas Technical Boots here.

Why You Should Adapt the 75 Hard ChallengeGeneralI Did a 3 Day Fast. Here's a Detailed Account of What Happened....Weight Loss & NutritionWhat's Training?! Thoughts on my Recent Lack of Exercise...General1000 Calorie Diet Book Is Here!Weight Loss & NutritionBest Practices for Pain Relief and RecoveryGeneralTransforming Your Home Workout: A GuideGeneral