There are numerous different skeletal muscle fibre types in the human body, each with their own unique set of capabilities for power output, growth, endurance, substrate metabolism and contraction speed.

In part, this diversity in skeletal muscle fibre types is the reason we see such a wide range of shapes and sizes of people, and more specifically, why we such a diverse range of physical capabilities, even amongst those who train regularly.

A clear example of physical variance can be seen in the Olympic Games – the sheer range of physiques and abilities on show cross the entire spectrum of muscle type distribution.

Broadly speaking, we can separate skeletal muscle fibres into slow and fast twitch. These exist in almost all land animals, yet few species seem to display the same random distribution patterns of fibre types that are noticeable in humans.

Slow twitch muscles fibres contract slowly and are small in diameter. They have a rich blood supply for oxygen delivery and lots of mitochondria, meaning they are very resistant to fatigue. Slow twitch muscle fibres react slowly to the neural stimulation that signals initiation of muscular contraction. The result of this is a slow break down of ATP. Additionally, slow twitch muscle fibres contain myoglobin, a protein that binds to oxygen, providing an additional source of oxygen when the blood cannot provide enough. This acts as a further barrier to fatigue.

Slow twitch muscle fibres are smaller in diameter, meaning their capacity for growth is limited. In addition, they are unable to generate the required power output to increase strength to a large degree, meaning their ability to perform the necessary exercise that would produce hypertrophy is limited. They would however, be likely to excel at endurance sports such as running, long distance swimming and long distance cycling with the correct training.

An example of a person with a high percentage of slow twitch muscle fibres would be Mo Farah. He has a very slight build and excels in long-distance running, a pure endurance event. Mo Farah displays the typical build of a slow-twitch dominant individual, with long, wiry limbs and low musculature. 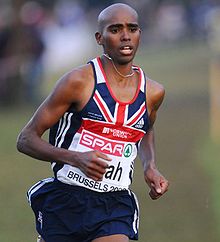 Fast twitch muscle fibres work anaerobically and have large deposits of glycogen. However, they have far fewer mitochondria, and the mitochondria that do exist in fast twitch muscle fibres cells are smaller. These cells are not adapted however to supply large amounts of ATP for a prolonged period. This means they contract rapidly and powerfully but fatigue in a short space of time.

With a larger cell diameter and an ability to perform powerful, explosive movements, fast twitch muscle fibres have an excellent capacity for growth. People with a fast twitch muscle fibre dominance would likely be of a heavier build and are generally very strong. With the correct training they would usually excel at strength sports, sprinting and throwing events.

An example of a person with a high percentage of fast twitch muscle fibres would be Usain Bolt. He is able to sprint faster than any man who has ever lived thanks to his ability to perform high-powered muscle contractions at a very fast rate. Usain Bolt has thick, heavy muscles that allow him to perform powerful movements quickly. He would however, probably be terrible at running anything further than 400m! 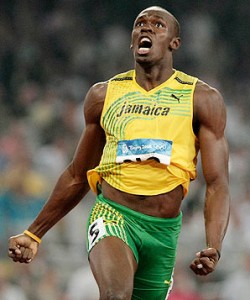 In the animal kingdom, muscle fibre type distribution is almost always very consistent. A typical example can be seen in the ‘white and brown’ meat of a chicken. The legs of a chicken are always ‘brown’ meat – this is the slow twitch muscle fibre as the chicken walks upright and doesn’t fly. The rich blood supply to these muscles mean the muscle is brown.

The breast meat of a chicken is always ‘white’. This is the fast twitch muscle fibre type. Chickens are essentially unable to fly, save for a few seconds. For this reason, these muscles have a poor blood supply, keeping the meat white. The muscles fatigue quickly and are thicker than the leg muscles. The chicken provides a practical and well-known example of fibre type.

In humans, we are far less consistent when it comes to muscle fibre type distribution. We all sit on a continuum of distribution and most of us will contain a fairly even mix of the two types, with a slight bias in one direction or the other. In the examples used in this article (Mo Farah and Usain Bolt), they will have a unique bias towards their own end of the spectrum. These are extreme examples however, and most of us will not display such a dominance in favour of one particular muscle fibre type.

There are the occasional consistencies though. In most of us, the postural muscles in the back tend to be slow twitch. The muscles of the arms tend to bias towards to the fast twitch end of the spectrum. The facial muscles are often slower twitch, as are the calf muscles. Again, these aren’t the case in 100% of the population, just the majority.

Slow and fast twitch muscles will typically respond to specific exercise in the only way they can. By this I mean fast, powerful exercises will generally do little to change to capabilities of slow twitch fibres, but will generate strength and size gains in the fast twitch fibres. Likewise, endurance work will improve further the work capacity (and to some degree, the size) of the slow twitch fibres, but will do little for the fast twitch fibres. It is for this reason we improve our overall athletic ability with a varied training programme – it is important to cater for all of our requirements, not just one.

Although we can over time increase muscle strength, muscle size, muscle power and muscle endurance with the respective training protocols, we are going to be limited by our genetic potential. Usain Bolt will never be a top-level marathon runner, for example.

Interestingly however, there is a third type of muscle fibre that is found infrequently in humans.This fibre type is a clear blend between fast and slow twitch, and although fast twitch in physiology responds well to endurance exercise, forming a different type of muscle fibre.

This muscle fibres type is found infrequently in humans, but displays a unique set of characteristics.

These fibres, also called fast oxidative fibres are unique because they contain large amounts of myoglobin to provide a reserve oxygen supply, are very high in mitochondria and have a rich blood supply through a dense capillary network. Additionally, type 2A fibres have a very high capacity for generating ATP by oxidative metabolic processes, re-synthesise ATP very quickly, have the ability to contract quickly, frequently and powerfully  and are resistant to fatigue. Essentially, they are the perfect blend of the other two fibre types.

Some research suggests that long term exercise in favour of a particular outcome, such as strength training will result in the gradual change of muscle fibre types and capabilities, meaning whilst we will never radically change our physical capabilities, by working towards a particular end goal we can really improve specific areas of our fitness as long as we train sensibly enough towards it.

These three muscle fibre types are the basis of all of our skeletal muscle. Armed with a knowledge of your make up, you can make better decisions around your training to get the most out of your time in the gym!