If you’re new to exercise I have a tip for you. In fact, it’s my number 1 tip for creating an exercise habit.

Many of us would like to exercise but lack the motivation or energy. Here’s how to create an exercise habit that sticks beyond the early motivation phase…

Just show up. Do something active, no matter how small or seemingly insignificant.

Be active most days. Do something, even if it seems like nothing. Cycle to work, go to gym at lunch, do squats in front of the TV, walk to the shop, buy a TRX or something similar and hang it from your door frame so you are reminded to exercise every day.

Regular movement will create an exercise habit almost by stealth. You’ll notice how crap you feel when you don’t exercise and move your body, making you do more of it!

At the start, consistency is far more important than perfection. It’s about creating an exercise habit and sticking to it.

Exercise is easy to do, because it’s additive.

Many people struggle when they have to take pleasures away – giving up smoking, drinking, junk food etc is usually much more difficult for people to do than starting an exercise regime. Removing or limiting ‘pleasures’ from life leaves us feeling deprived, whereas adding something positive, i.e. exercise has the opposite effect.

A consistent, regular exercise habit is the first domino. It causes a knock-on effect that benefits other areas of your life. 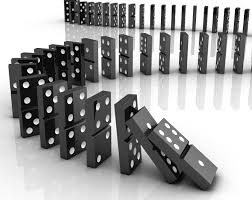 You may not know this at the moment, but once you establish an exercise habit you’re far more likely to benefit from a phenomena that psychologists call ‘The Transfer Effect’.

The transfer effect is simply described in the text below…

Researchers used data from 6,244 respondents to the US Department of Labor’s National Longitudinal Survey of Youth 1997, which tracked the eating and exercise behaviors of at ages 18-22 and 23-27. (It also tracked their eating, but not their exercise, at ages 27-31.)

The researchers found a linear relationship between exercise and fruit and vegetable consumption: The more you exercise, the more produce you’ll eat.

These changes can be explained by two kinds of transfer effects. In the first, because both exercise and eating fruits and vegetables lead to the same goal—a healthy weight—individuals can easily transfer lessons from one to another. The second kind of transfer effect is the result of a person’s mental bandwidth: Once exercise becomes part of a person’s regular routine, he/she no longer needs to think about it, freeing up the brain to think about new ways to be healthy, like eating more fruits and vegetables.

Looking beyond the transfer effect and more into neural programming, your new exercise habit literally re-wires the brain. It makes fitness and exercise part of your identity.

But you have to start in order for something to become a habit. Start exercising and keep it up, no matter how basic.

A habit can be considered an automatic behaviour – something you don’t really have to decide, you just do. A smoker doesn’t think about each individual time they light up, they just do it. Many people come home from work and open up a bottle of wine – they don’t think about it.

When they become established, habits literally re-wire the brain to the point where your thinking passes the ‘decision-making’ stage of behaviour and go straight on to action, as found by a team at Duke University.

In English, this translates as when a habit becomes established, you do it on autopilot and don’t really have to summon up motivation or give it any thought.

You’ll eventually get to the point with an exercise habit where you won’t be waiting for motivation to wash over you – you’ll exercise whether you feel like it or not.

There are always barriers to exercise, but fortunately most of them are self-prescribed. The most common is “I don’t have time”.

Audit your day. There’ll always be even 5 minutes in which you can do something.

I mentioned earlier a few ways you can be active. Remember at this point it’s not about the perfect workout, about high intensity or huge weight. It’s about consistency and establishing an exercise habit. Making being active your new normal.

It’s not about being a world beater.

Regular exercise will benefit your health in lots of ways. Consistency always leaves footprints. You’ll make a series of mini-improvements along your journey.

You’ll be stronger, fitter and have significantly more energy.

There’s a chance you’ll think you are too tired to exercise at the moment. Possibly because of work, kids etc. It’s not true – let me explain why…

So you aren’t too tired to exercise – you’re tired because you aren’t exercising.

I’ve seen this before, in particular with a personal training client who said he had no energy because his work was so demanding. Once he started a regular exercise plan, he realised he was tired because he wasn’t exercising.

Imagine the shift that went on in his head – his belief was turned upside down.

How to start exercising when you’re too tired…

If you are genuinely tired because of your lack of exercise, you need to break down your week and find out times when you aren’t suffering from tiredness.

Typically, mornings and weekends work. Once you’ve built an exercise habit, you’ll have more energy, making exercising at other times easier. To start with though, stack the deck in your favour and exercise when you can. Keep the workouts short and manageable, building in intensity and duration when you can.

It won’t take long for you to start feeling better.

To conclude, there are millions of tips when it comes to exercise, but for beginners, the best one is simple. Just do it. Just train, move, exercise or whatever you want to call it. Don’t compare yourself to others, just get started. Exercise consistently and focus first on building a habit. Once you’ve done that you can then focus on building fitness and/or your ideal body.