On Saturday 11th of September 2017, a group of six of us completed Tough Mudder North West. It was the third (and probably last) time I’ll do the event, but it was great fun all the same!

If you’ve never done Tough Mudder, basically you need to expect mud. Lots and lots of mud. Apparently (I’m getting this from Tough Mudder tourists who have done events all over the place), the Tough Mudder North West is the muddiest of the lot. It really doesn’t surprise me!

We had a bit of a queue in the rain before making our way to the sign up area. This was 50/50 because there weren’t enough people on the signing in desks, but also we picked the slowest queue (accidentally!) We made our start wave by the skin of our teeth, despite being on site nearly an hour beforehand.

This actually worked out pretty well in the end as it let me drink a For Goodness Shakes bottle as we waited – an ideal pre-run drink!

After the warm up and the mudder pledge, we were off! 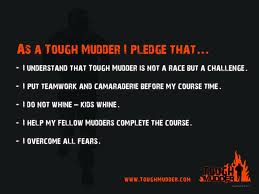 We ran a lot more than usual, which was because the runners were spread apart more, meaning there was space to run. This was great – it felt like a running race this time, which also meant we managed to do the event in a quicker time. The extra running also meant we stayed warmer throughout. Despite the rain, we didn’t ever feel cold.

Alongside the old classic obstacles there were a few new ones and a couple of re-inventions. The new version of Arctic Enema was a big hit amongst our group! I can’t say I was looking forward to it, but the freezing cold hit actually warms you up afterwards…

I don’t know how or why, but honestly it’s true. Maybe your body reacts to the cold by working extra hard to warm you up, I’m not sure, but within 1 minutes of getting out I was really warm and had a sense of euphoria! Strange!

Augustus Gloop was a hit with our team (as is anything were you get wet really!) and the Funky Monkey 2.0 also went down well. It’s important that the team continue to innovate with their obstacles otherwise the event will become pretty stale.

At the finish line I had the usual sense of pride and this time (at the risk of sounding dramatic), closure. I think this will be my last Tough Mudder. I enjoy it and think it’s a great event, but after three I have a sense of ‘been there, done that and got the (three) t-shirts.

In a world full of fitness challenges, it’s time to move on to something new. There’s only so many times a Tough Mudder is a novelty.

This time (as a celebration), I dragged the team to a nearby spa hotel – there’s no better way to recover from Tough Mudder than a power shower, jacuzzi, sauna, steam room, swim, cooked meals and a comfortable bed to sleep in.

Don’t we look snazzy in our spa robes and slippers?!… 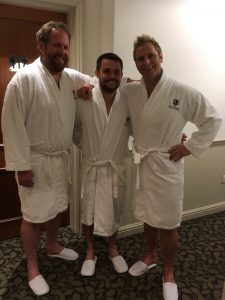 To conclude. Tough Mudder remains a great event and I’ll always be a fan, it’s just I’ve done three now so don’t know what they could change or offer up to make it a new challenge. What they do, they do well – it’s just me wanting a new challenge that means I won’t do another. The quality of the event hasn’t dipped at all!

Thanks again to For Goodness Shakes for supporting us with t-shirts and protein drinks! They were a great help!